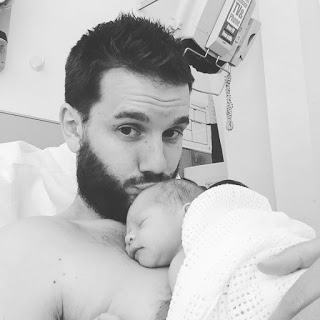 First 24 hours with a new baby

Sitting in a hospital ward next to your sleeping wife and new born son is a fairly significant moment in a guy’s life.

You go very rapidly from the panic, fear and utter chaos of labour and the delivery, to a kind of serenity and calm that’s pretty much unparalleled in any other experience I have had in life so far.

The parenting books, the ante-natal classes, the advice from parents, friends and colleagues….those were all very welcome, of course. But they went completely to the back of my mind as we were faced with the reality of real parenting for the first time.

I found that in the build up to our son’s delivery the hospital experience was the only thing I had actually been seriously thinking and worrying about. Nappies, sleep deprivation and looking after an actual real life baby were all very much secondary to the fact that all I could focus on was that my wife would be OK and our baby would be healthy.

So sitting by a newborn son, the reality does hit you….but not as hard as you might think.

I wasn’t worried. Nor scared that I wouldn’t know what to do. I wasn’t even grossed out by the thought of that first shitty nappy. I was just filled completely with happiness that he was here, he was safe and healthy, and my wife was OK (although I suppose OK is a relative term….she had just squeezed a human out of her….)

The first few hours were spent on the post-natal ward, and were fairly uneventful. My wife was able to get a bit of rest while I doted over our son – still un-named at this stage. It was about 07:00 and relatively quiet (unlike the ante-natal ward, where the screams pierce your bones). There were a few little sounds; midwives checking on new mothers, or the occasional newborn squeal. But as the day wore on, there was more noise.

Phone calls. Visitors. Snoring.  (If I hadn’t known better, I could have sworn there was a sleeping manatee in the bay next to us at one point).

There was also a very funny moment when my wife was rudely awoken by a loud fart from the bay to the other side of us. I tried to convince her that it was her, but she knows me too well for that….

We didn’t have to wait too long to get in to the real parenting either. The first nappy (imagine Marmite mixed with treacle) and the first attempt at breast feeding (my wife, not me) were both roaring successes. And I was already getting used to the new words and phrases that were entering my lexicon, with the midwives forever asking how baby’s “latch” was, and encouraging a bit more “skin to skin”.

The first 24 hours were awesome.