As a new father, I don’t think there’s anything more frightening than your wife waking you up at 3:00am screaming: “HE’S NOT BREATHING!”

I know, because that’s exactly what happened one night this week. Thankfully, Marley was just mastering a technique I call the ‘fake choke’. The one where he thrusts his head right back, holds his breath and goes a deep shade of purple.

He holds it in for a few seconds longer than is normal (just long enough for us to think there’s something very wrong) before he finally exhales and goes completely back to normal, in what is probably the meanest practical joke anyone has ever played on me. And my brother once filled a box of chocolates with stones to give me as a birthday gift.

Fake choke aside, it’s actually been an excellent week. Firstly, our cat Bo seems to have accepted her new secondary role, and even joined in as we were giving Marley a bath.

We’ve also had a lot of visitors, and it’s always so nice to see how happy people are to meet him. He’s been on his best behaviour too, sleeping pretty much all the way through any lunches or dinners we’ve had and never crying when anyone holds him.

One set of visitors brought along their two year old boy, and we all went out for brunch at Mel’s before heading back to our place for coffee and cake. It turns out two year olds are a bit more difficult to handle than a newborn.

After a couple of stones (and tantrums) had been thrown, the two year old was looking around our garden and spotted my tomato plant. Now, having never had a garden of our own before, I have been making the absolute most of it and attempting some home grown veg.

The tomato plant (miles ahead of the jalapenos, rosemary, mint and basil) is the one success I am particularly proud of. So imagine my utter horror when the two year old approached, reached out, and picked off one good sized but unripe, green tomato and run away with it.

I pretended not to be annoyed (inside I was crying) and actually felt a little bit bad for him when he got a severe ticking off for his theft and consequently burst in to tears. But he deserved it. Look at those teeth marks!

Anyway, I was fully cheered up when Marley started cracking his first proper smiles recently. I had been told that some new fathers struggle to form an immediate bond with their newborns, and it can make you feel like a bit of a spare part at times….but then when they smile, it all feels worth it. Well, fortunately, Marley seems to have taken to me pretty well (he always seems to stop crying when I hold him, which I love) but even so, those first few smiles have still been totally heart-melting and we’re just so delighted to see him happy.

I just hope that it’s his new giant gorilla ‘Abz’ making him smile, and not the fake choke prank. 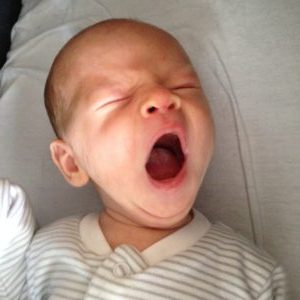